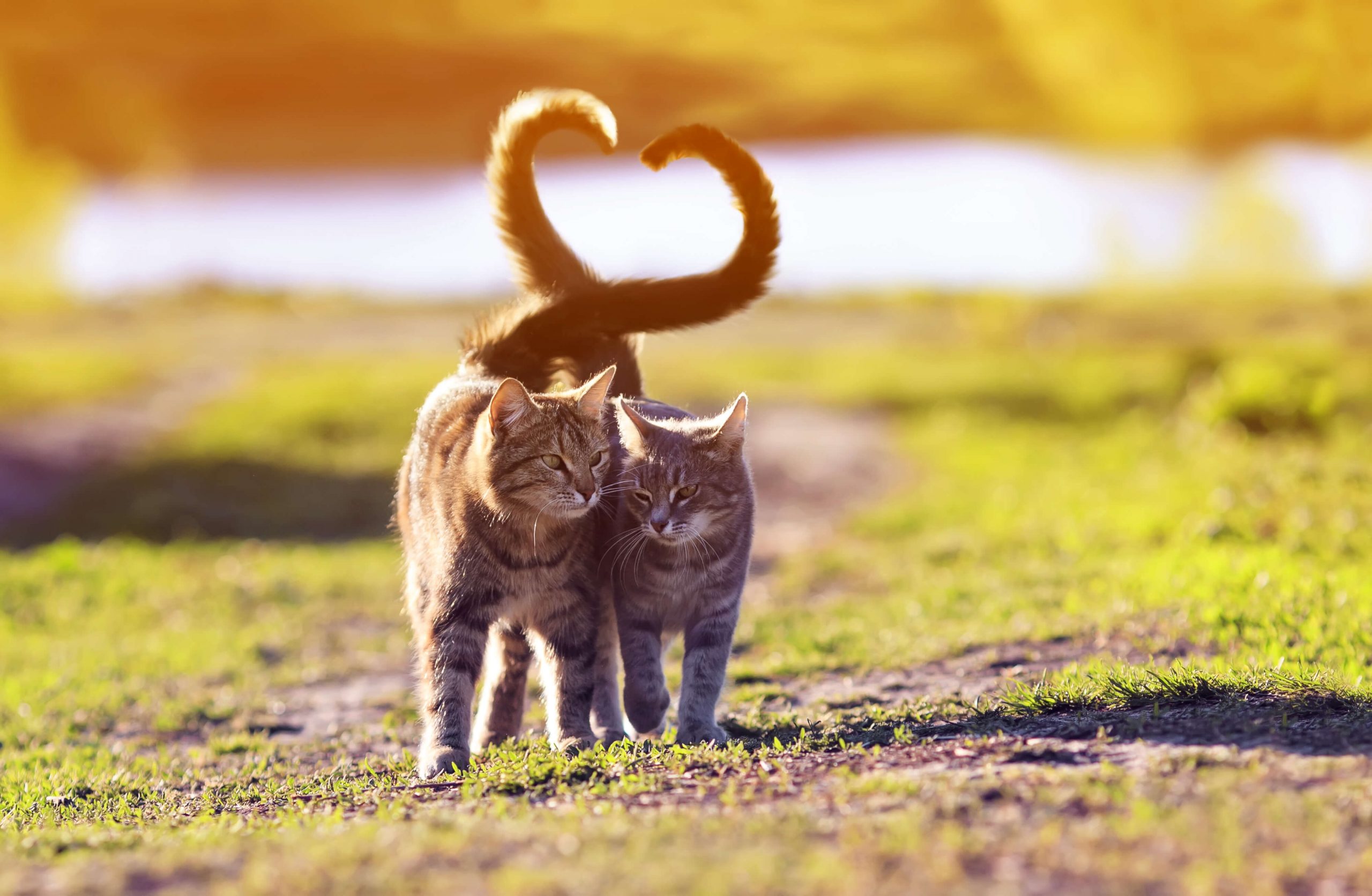 Perhaps you have seen a dominant male cat “take over” another male cat. Or maybe you wonder about a female cat that is drawn to other female cats while disregarding male cats. Cats often sleep together, groom each other, play together, and exhibit what may be sexual behavior with a marvelous tenderness even if they are the same gender.

These are all interesting and valid observations, so if you have a cat, you may have wondered if he or she could be gay.

Since house cats don’t usually have significant others, it could just be speculation. However, if you look at the animal kingdom as a whole, you may get some clues.

For a long time now, same-sex behavior has been noted in animals of different species. In his book, Biological Exuberance: Animal Homosexuality and Natural Diversity, Canadian biologist Bruce Bagemihl wrote about same-sex behavior in more than 450 different kinds of animals worldwide.

According to Yale Scientific, there have been discoveries of same-sex behavior in more than 10% of species throughout the world.

Back in 2014, the BBC reported two male Humboldt penguins who raised orphaned eggs together at a zoo in Kent, England. The headlines referred to them as “the Gay penguins.” (This is an adorable story, by the way!)

The bottom line is that same-sex sexual behavior is prevalent in some animals, but does this prove that animals can be gay?

Let’s look at some other factors.

Can you compare human sexuality to cat sexuality?

The concept of sexuality in humans is complex. Human sexuality encompasses sexual behavior, sexual desires and attractions, and romantic feelings.

Gay human beings are defined as being sexually attracted to those of the same sex. But scientists who study the sexual activity of animals claim that we should not compare our instincts and behavior to animals for several reasons, the main one being that we are not animals.

For example, cats do what they want sexually, and are unaffected by the internal conflicts that can often plague humans. Cats do not spend time thinking about their sexuality or who they engage in sexual relations with–they just do whatever feels good to them.

Other factors to consider

When observing cats (or any animals for that matter,) there are two key factors to take into consideration to help find answers as to why they act the way they do: behavior and motivation.

Behavior is, obviously, the physical acts. These sexual behaviors include, but are not limited to, mounting, genital stimulation, snuggling, and grooming.

Motivation, on the other hand, is the thought or reason behind the behavior. Speculating about the motivation of cats usually involves anthropomorphic thinking, which means describing human emotions to a non-human entity.

You see the issue here. While the behavior can be observed in animals, the motivation cannot. Cats cannot tell us what the intent behind their sexual activity is, so we cannot depend on that.

Scientists study two other factors when trying to determine whether animals can be gay: exclusivity and longevity.

Exclusivity considers whether animals participating in sexual relations are only doing so with members of the same sex.

Longevity in animal’s sexual patterns refers to lifelong partnerships with the same sex. While some animals such as bald eagles, pigeons, and wolves are said to mate for life, cats are not on the list.

Cats don’t engage in sexual behavior for long periods with the same partner. For example, unsprayed cats will go into heat several times a year and may attempt to be mounted, rubbed, or licked by another cat, regardless of sex. Because of this, longevity is difficult to measure.

What we know about cats and sexuality 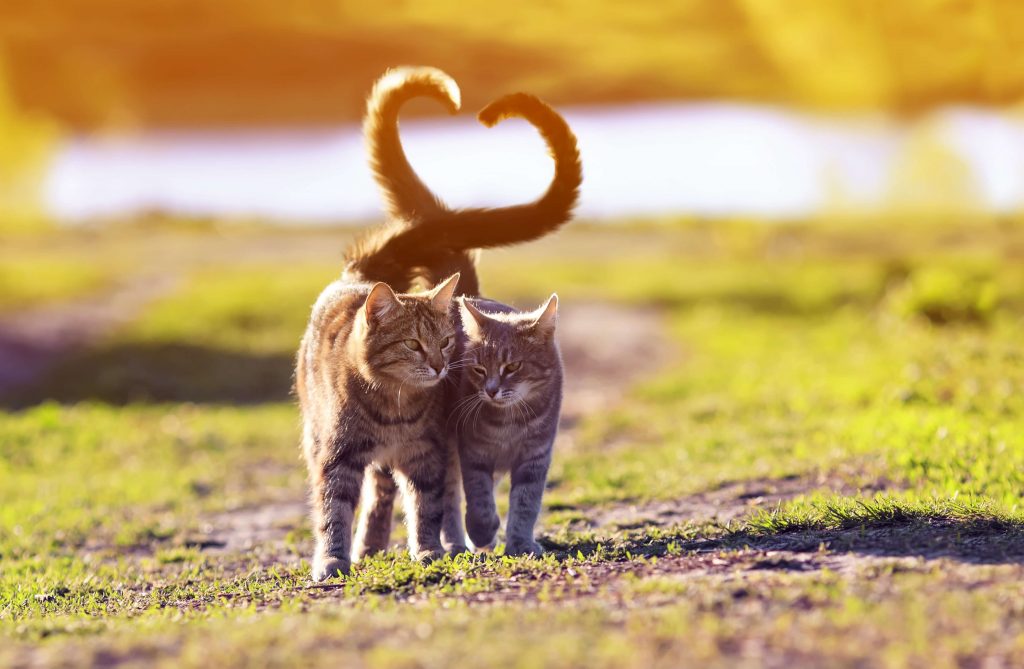 Unlike humans, cats do not have a full range of sexual emotions that can be identified, but they obviously engage in sexual behavior. Cats can be “attracted” to other cats. They can also act out sexually with cats of the same gender.

However, being gay is not part of their mentality. Cats behave naturally and instinctively. They do what seems appealing at the time.

Here are some observed examples of sexuality in cats:

A female cat who has not been spayed goes into heat approximately every three to four weeks. When this happens, she readily welcomes a male cat’s sexual attention. However, when she is not in heat, most female cats are hostile towards male cats. She may hiss, spit, and scratch him.

Male and female cats alike generally have a decrease in sex drive after they are spayed/neutered.

(Females more so than males.) Depending on the age at the time of the procedure, they may retain some mating urges for some time, but as they age, the urges decrease.

Male cats can become hyper-sexualized and act out sexual aggression to other cats they encounter. This can occur even if they are neutered.

Sometimes male cats can view a neutered male cat as a non-male. When a male cat is neutered, the pheromones that are produced through testosterone are greatly reduced or non-existent, so the neutered male smells like a female cat.

Finally, if cats live with only their cat housemates and are not around other cats, the sexual behaviors they exhibit will be directed towards their housemate cats. If there is only one cat in the household, they may direct sexual advances towards other pets (like dogs), people, or stuffed animals. 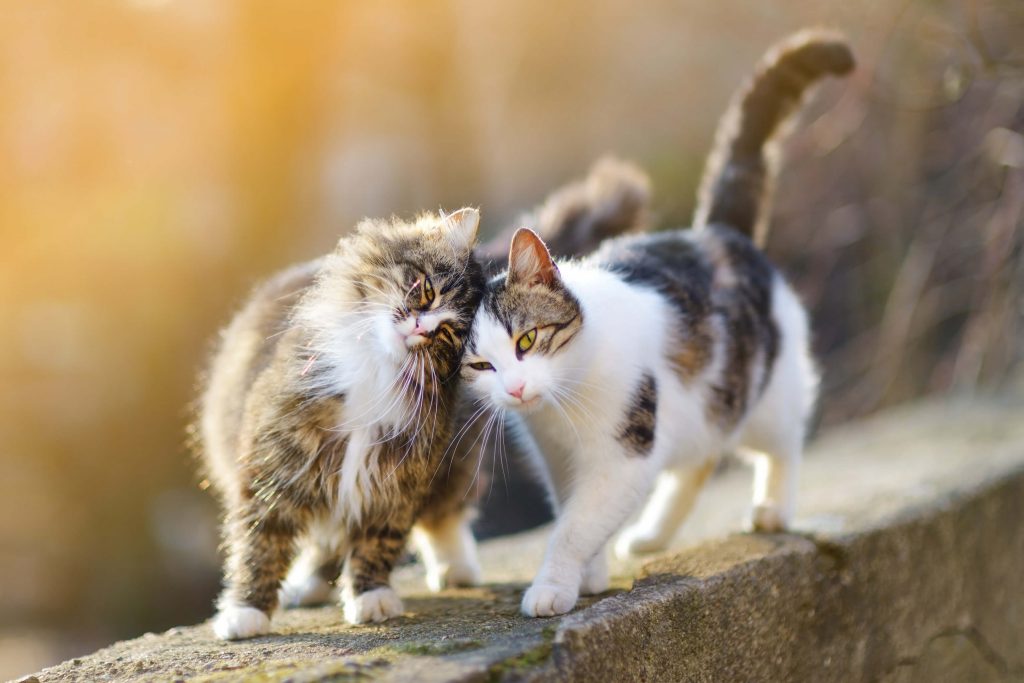 As humans know, physical sexual behavior is just one part of one’s sexuality. So, now we will address the question, can cats love?

Cat owners claim that even the most ill-tempered cat is capable of love, and it is mostly addressed towards their owners. However, since love is an emotion, there is no way of scientifically measuring the presence or absence of it.

Research is still being done and will continue since scientists are able to identify to spikes in the hormone, oxytocin, that signifies the emotion, love. For example, a number of studies have shown that when humans and dogs interact, oxytocin increases in both the dog and the person’s body.

A  recent experiment has shown that cats, too, experience a release of oxytocin when snuggled and petted by their owner. Their levels of oxytocin did not spike as high as dogs normally do, but this study still proved that cats do, indeed, respond to human contact.

We know that cats are capable of love, but we don’t know whether it’s related to sex or not.

Can a cat’s sexual behavior be misinterpreted?

The American Society for the Prevention of Cruelty to Animals (ASPCA) says that animals mounting each other is less about sex and more about playing, releasing stress, and showing dominance.

Male cats (even neutered ones) often mount their parents or their brothers and sisters to show them who is in charge. This is simply a dominance act.

Some cats mount other cats of the same sex to expel unspent energy or relieve stress. It may have nothing to do with sex.

Cats, known for their grooming skills, will often lick each other and sleep cuddled up to other cats. While this may seem like sexual behavior, it’s probably more has to do with grooming.

Back to the behavior and motivation that I mentioned earlier, we can interpret the behavior, but the motivation is harder to decipher since there may be other reasons why a cat seems to exhibit same-sex behavior.

So, can cats be gay?

Getting back to our initial question: can cats be gay? As you can see, sexual interaction between cats of the same gender can and do happen, but the answers as to why this happens are not simple ones.

Obviously, we cannot communicate with cats well enough to illuminate this topic, so it’s difficult to distinguish between a cat that has a long-term preference for same-sex members versus a heterosexual animal that engages in same-sex acts.

For example, if a presumed “gay” cat will still breed with a female cat in heat, that dispels the notion that he is gay.

The jury is still out.

While there’s much speculating, there’s no scientific evidence of animals, specifically, cats being gay or not.

In a Washington Post article,  Paul Vasey from the University of Lethbridge states, “Whether there’s any kind of same-sex sexual preference going on, that’s left entirely to the imagination in the sense that the data just [doesn’t] exist to demonstrate one way or the other.” He continues to say that being exclusively gay is “exceptionally rare” in the animal kingdom.

While you may want a straightforward answer, there is not one in this case of proving cats can be gay or not.

The bottom line is that while there are studies being done to try to explain same-sex behavior in cats, as of now, we simply don’t know the answer.

And we may never know since cats cannot tell us if they are gay or not. Not to mention, obviously, cats don’t care what their sexual orientation is, and we should probably follow their lead. 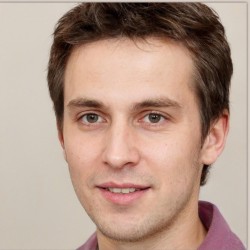 David Fields is a long-time animal lover and has been blessed to share his life with many companions. A short list includes ragdoll cats, siberian husky and greyhound dogs, an African Grey parrot, many fish of all sorts, and a pandemonium of parakeet. He writes most of the articles on iPetCompanion and is regularly featured on other popular websites on the Internet.