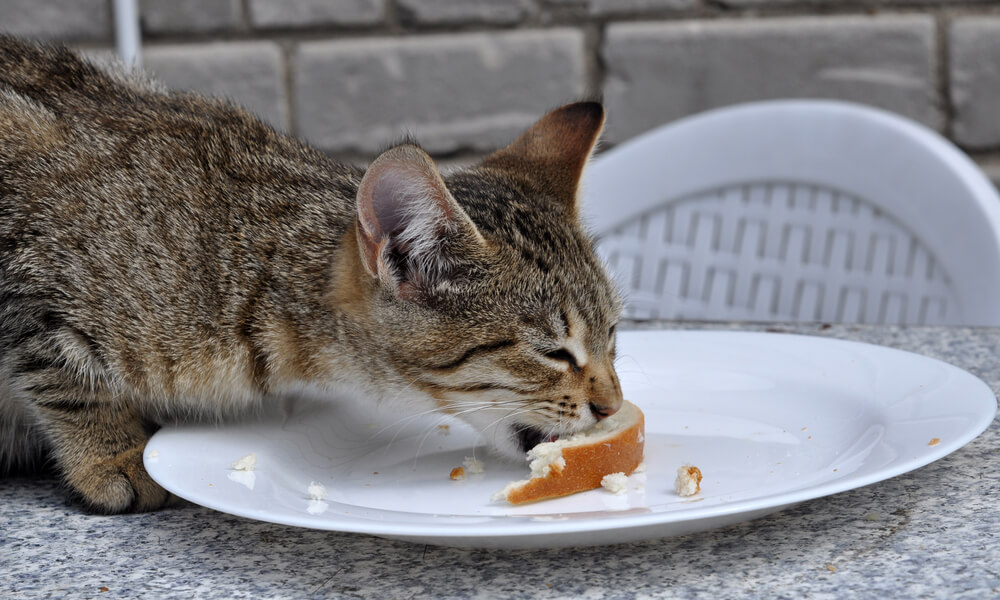 I never imagined I would be Googling something like, “Can cats eat bread?” until I adopted my own furry feline, Libby, several years ago. Now I’m Googling and asking Siri all kind of advice on cats, whether or not they can eat strawberries, what to do if they get into your Elmer’s glue, how to get them to stop scaring away hummingbirds, and the list goes on.

Today’s topic, though, is, can cats eat bread? And since you’re reading this, you want to know, probably right away. The answer is yes, in most cases, cats can eat a small amount of bread, assuming it is just bread and contains no extra toppings like butter or garlic. However, that doesn’t necessarily mean they need bread or that it provides any health benefits. Then again, I eat foods I don’t technically “need” all the time, so no judgment there.

Is Bread Dangerous for Cats?

Bread by itself isn’t dangerous to cats. It contains simple ingredients like flour, water, eggs, milk, yeast, and olive oil, none of which are harmful to cats in small amounts. Store-bought bread is generally high in preservatives, though, which isn’t great for your cat.

The danger, however, lies in unbaked bread dough and additional toppings such as cheese, garlic, onions, and even raisins. Unbaked bread dough will expand in the warm, moist environment of their stomachs, which can cause bloating, stomach discomfort, and a potentially life-threatening digestive blockage. In addition, yeast will ferment and release alcohol, which can cause alcohol poisoning. If left untreated, the condition could lead to seizures or respiratory failure.

Common signs of bread dough toxicity are vomiting, drooling, weakness, collapse, and either elevated or low heart rate. If your cat gets into bread dough, it’s time to call your veterinarian immediately.

As far as bread toppings, cheese in small quantities is usually fine, but some cats are lactose intolerant, so be aware of any digestive issues. Garlic, shallots, and onions are toxic to cats.  They can cause anemia, and in large amounts, organ failure. In addition, raisins are toxic to cats and could cause kidney failure. So, raisin bread is a no. If your cat eats any of these common additives to bread, call your vet right away.

Is Bread Good for Cats?

OK, so I won’t be letting my cat have the last piece of garlic bread from dinner, and no way will she get half my cinnamon raisin bagel, but is plain bread even good for cats?

Not really. The only possible health benefit from bread is the fiber, and because cats are carnivores, they get all the nutrients they need from meat-based foods, including fiber. Cats will not benefit nutritionally from carb-laden bread. Dr. Amy Farcas, a board-certified nutritionist at San Francisco’s Veterinary Nutrition Care, says that since cats require protein and fat, feeding them bread (or other carbohydrates) should be limited.

In addition, Dr. Julie A. Churchill, an associate professor of nutrition at the University of Minnesota’s College of Veterinary Medicine, says a small piece of bread is fine for your cat, as long as he’s at his ideal healthy, lean body weight and condition. The problem lies in portion control. Too much bread feeding can eventually lead to obesity and diabetes in cats. So, while bread isn’t particularly harmful to your cat, it’s also not a good food choice either. 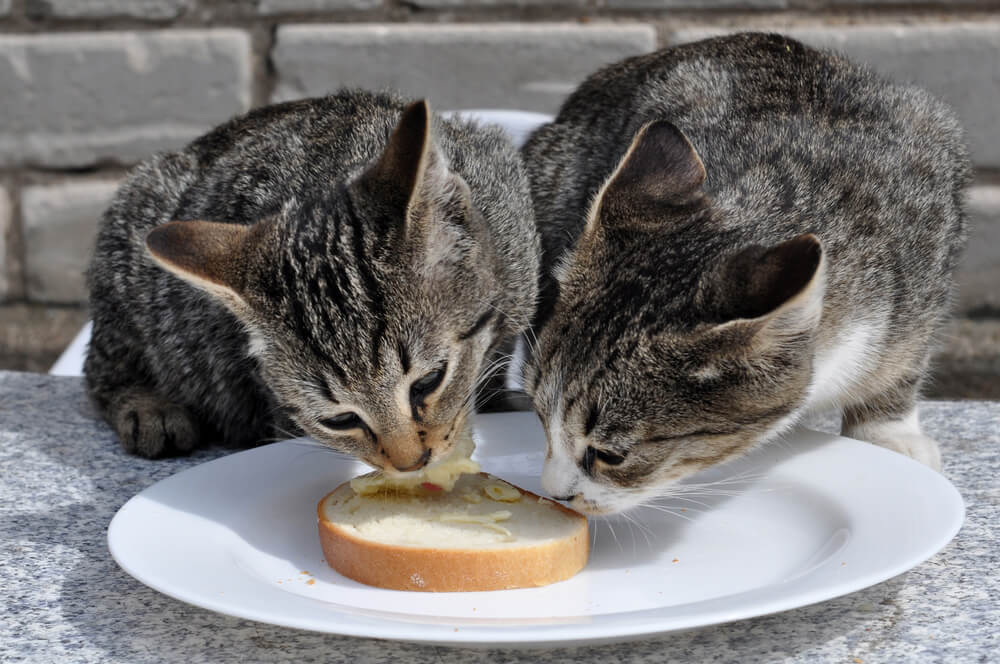 What About Kittens? Can They Eat Bread?

It’s super hard to resist the cute, cuddliness of kittens, and you may wonder if your kitten can eat bread. The answer is yes; kittens can eat bread if they are already eating solid food. Obviously, restrict the amount you give him. A kitten’s stomach is quite sensitive, so two tiny pieces are enough for them.

Can I Feed My Cat Toast?

This may seem like a silly question, but it’s not. If you can feed your cat bread, certainly he can have toast too, right? The answer is that cats can have toast with no toppings if it is not burned. I say this because many people burn toast and still eat it (I’m guilty of this too, I don’t want to waste it, even though it tastes terrible) However, burned toast has a dangerous compound called acrylamide that can be harmful to cats and humans alike. Research has shown that acrylamide is linked to several types of cancers. Now, don’t worry too much because you would need to eat A LOT of burnt toast here, but cats should not eat it at all.

In addition, cats should not eat our commonly loved toppings on toast: Jelly (too high in sugar), butter, or peanut butter (too high in fat). No Nutella, either. If your cat has a bite or two of unburned, no-topping toast (although that certainly sounds bland, I know),  she will be fine.

You know as well as I do that cats are strange, finicky creatures, especially when it comes to their food. Your cat may love bread and end up begging for it every day (don’t give in!) Cats love the flavor of yeast; in fact, yeast is used as a flavoring agent in many cat foods. However,  he may turn up his nose at it. If he doesn’t like it? Oh well, it’s not like he needs it to survive.

The Bottom Line: Bread is OK for Cats, but Only in Small Amounts

You may ask, “OK, what is a small amount?” A bite or two, but use your common sense. Don’t feed your cat bread every day. It should never be a staple in his diet. (Remember, he needs meat!) If your cat depends too much on foods other than meat, he will more than likely encounter health problems down the road.

Always remember what has been proven to be toxic to cats: garlic, onions, raisins, and raw bread dough. Cats, under no circumstances, should have these foods, as they can cause serious life-threatening health conditions. So, if you MUST feed your cat bread, as in she is following you around the house begging for it, remember just a bite or two. 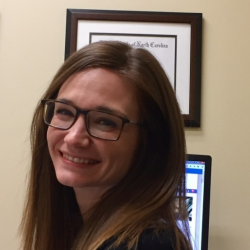 Renee Whitmore is an American college professor and freelance writer from North Carolina. She holds a Bachelor’s Degree in English and a Master’s Degree in English Education. When she is not driving her teenage son to wrestling practice or learning the ins and outs of Fortnite from her younger son, she is working on her first book to be published soon.